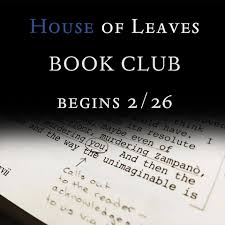 After a lengthy hiatus, I have decided to make a return to blogging. What pulls me out of my prolonged absence is a cocktail of slightly unpleasant things that life has thrown at me this week. Thursday especially was a pretty nasty bastard, I’ll have you know.

Here are the ingredients, in case you should want to emulate my Poe-esque misery:

So it is with all moments of productiveness, that are spurred on by desperation I find, that something comes to the rescue: The House of Leaves !

I thought to myself ‘why not?’ After all, it’s been 11 years since I entered that formidable  House on Ash Tree Lane, 11 years since I experienced quite literally the most powerful piece of fiction I have ever come across. I liked the fact that MZD planned this so close to his birthday, which is close to mine. I liked that it was a gargantuan project (once you fall into the house, there is no coming back out). In short, it felt like fate.

I’m never on time for book clubs, but this one started yesterday. Those taking part should be reading between the dates of 26th February and 3rd March the following:

Now, since most people will have different editions (some coloured, some not) you will have to adjust what you read. Since I’ve gone through this monstrosity before and lived to tell the tale, for me it’ll be like entering the Overlook Hotel after Johnny went mental and the place was abandoned for years.

For those who have never read HoL but heard about it, the experience is a completely unique. There isn’t a novel like it, and I liken it to the mad genius of Brett Easton Ellis’ American Psycho, where the novel has a life, will and consciousness (rather a ‘lack of’ of its own).

FIRST-TIMERS WARNING: This is no spoiler, but if you decide to do the read-along, then you will inevitably run into the CODES – these are secret messages embedded in the text/ footnotes/ margins etc. I shall be periodically posting my thoughts about these as I come across them. If you do not know what I mean by this, check out the official FB website, where the madness has already begun with people cross-referencing like mad between the pages: House of Leaves Book Club.

There is also the real madness of the ‘coding’ forums, which can still be found here: Mark Danielewski Forums (caution upon entry is advised… it can get rather too much in there with the info. Spoiler alert…)

So, I’m off to read the bits assigned and will come back to address the all important question that MZD will be posing, which is:

“How does “This is not for you” apply to the book, the reader, and Johnny Truant?”

Is anyone game to read along with me and throw some theories out there?